When it comes to the bend on a stick, there can be as many options to choose from as there are colours in which that stick can be painted.

There can be so many options to choose from that unless you know specifically the style of stick that you want, it can all seem a little daunting!

To help narrow the field, we’ve decided to create this little overview of some of the specifics to help you close in on that all-important new purchase!

As the game has progressed in recent years, the old days of a straight wooden stick are as out of date as the old leather football. And just about as stylish.

The advancement of technology has seen no greater impact than that which we’ve seen to the design and advancement of the sticks available to players. Composite and Fibreglass have replaced wood and in doing so, have unlocked a whole new shape of hockey stick that has allowed for them to contain bows (or bends), subsequently changing the way the game is played.

As the times have changed, the financial input into the game has also done so. A higher marketability within the sport and financial incentives in the form of the Hockey India League and, more recently, the FIH Pro League has led to a greater financial backing within the sport. Major global input from Adidas has dominated the elite level of the game and Nike’s continued investment within the United States of America will only serve to benefit the sport as an entity.

With sticks, the size of the bow is determined by the height of the gap between the stick and the floor when it is lay down ‘flat’.

This size has been limited to being no greater than 25mm to allow for a degree of conformity as well as to maintain the safety of players. The FIH enforced these rules to be introduced at every level of hockey from 1st January 2013.

In order to get the most out of a bow that has a limited size, brands have ingeniously moved the place and length of the bow on the stick to affect the impact it has for a player. When combined with the differing compositions of sticks, the array of stiffness, strength, touch and power within sticks can be remarkable.

Unfortunately, there is no universally accepted language for the description of a hockey stick, meaning that brands’ own marketing strategies will emphasise specific qualities of their sticks using different terms and descriptions. Thankfully however, the bows allowed on hockey sticks can largely be categorised into 3 main shapes;

A Mid-Bow would be as close as you would come to a ‘straight stick’ and would see the bow implemented higher up the shaft. Often deemed to be best suited for developing core skills, the Mid-Bow would not be as profound as other sticks and can make a great starter bow for a player learning the game and developing their skills. Controlling passes and hitting is often deemed easier with a Mid-Bow as it presents a great angle with which to impact the ball. A great example of this is the JDH X93 Mid-Bow.

A Low-Bow would see the bow moved from the middle to the bottom of the stick, far closer to the stick head. The Low-Bow allows for a greater angle on the stick head when striking the ball, making it easier to get the ball in the air through aerials, hitting and lifted skills. By default, a Low-Bow would suit a more experienced player withgood core skills who can control the variance in bow when compared to that of a Mid-Bow stick. Drag-Flicking becomes easier with a Low-Bow stick due to the increased angle upon pick up. A great example of this is the YoungOnes LB X.

The Ultra Low-Bow is an extreme version of the Low-Bow. Often a shorter bow than the aforementioned Low-Bow, the bow is moved even closer to the stick head and therefore provides and even more pronounced angle with which to impact the ball. As a result, 3D skills and aerials become easier but controlling hitting, on the forehand and backhand require greater focus. Ultra Low-Bow sticks are perfect for advanced players with a high degree of skill. The increased angle of the stick head can make stopping the ball harder and therefore a good level of control is essential for any player looking to move to an Ultra Low-Bow stick. A great example of this is the Adidas AX Carbon Hockey Stick.

Most brands look to provide a range that suits all of the above bow requirements so it is important to make sure you understand the size and position of the bow, as well as the impact it will have on your game, before you purchase your new stick!

Within each of these three main categories, stick brands will emphasise a certain bow as a key selling point, identifying the benefits that accompany the style. It is important that you can identify the key points of each stick within the range when identifying the best bow to suit your game; How big is it? How far down the shaft is the bend?

Unfortunately, there is no universal language for the bends of a stick and each brand has marketed their sticks as different bends. For instance, the Grays Range utilises different names for variations of the size and location of the bends on their sticks and Gryphon do the same also see below. 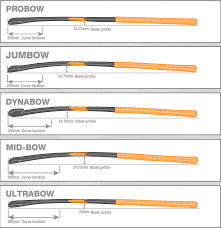 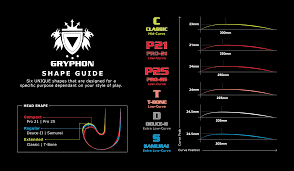 Make sure you practice with as many different bows as you can before purchasing so you know exactly what works for you and feels the best to advance your game!